Back In A Groove

I finally feel like I'm getting back into a sort of rhythm again. The summer really threw off where I was going and what I had planned. It was like I was on a clear path for the first half of the year, and then everything just got knocked off the tracks. I'm trying to pull myself back on and adjusting the course as necessary, but still not sure where I'm going to end up.

I know that's all a bit convoluted, but that's because it's like that in my head - all muddled, with only a few sure things to lead the way.

In the meantime, a friend forwarded me this link to an interesting post by Amal El-Mohtar, which was in response to this post by author Elizabeth Moon. Just to sum up, Moon is to be honoured at Wiscon next year as an esteemed Guest of Honour. The issue at hand is that Wiscon is the "world's leading feminist science-fiction/fantasy convention." Moon's post, however, is very problematic, to put it mildly. The Wiscon conference committee released a statement that they did not intend to rescind Ms. Moon's Guest of Honour-ship, but that they hoped the conference would be a place for further dialogue on the issues.

I won't give additional credence to Moon's post by reproducing it here in any of its parts, but here's a bit from El-Mohtar's response:


"I can't help but wonder, if Moon had said that 'many Black people possess all the virtues of civilised persons,' there would have been any 'controversy' at all. Or, to forestall the 'race and religion are different!' arguments, if she had said 'many Jews possess all the virtues of civilised persons.' Basically, if she had expressed bigotry that can't masquerade as a political leaning or a concern for national security, would there be any soul-searching over what to do? Would the committee co-chairs still be 'committed to making WisCon a place where all may participate and be heard'?

For me, it's a tough call with regard to the conference because the other Guest of Honour next year is Nisi Shawl, whom I deeply respect and admire. At the same time, Wiscon is a feminist, progressive conference. It is one of the only spaces of its kind where people of like mind can gather and move dialogue forward. It is one of the few places where discussions around power and privilege are part of the programming and actually take place, front and center, in all their honesty, ugliness, mess and, at times, enlightenment.

Do read the posts if you get a chance. The comments after El-Mohtar's post are lengthy, but worth the read, too.
Posted by Neesha Meminger at 10:01 AM No comments:

This is a crappy cell phone image, but if you look closely at my cup of tea from this morning, you'll notice a natural yin-yang . . . 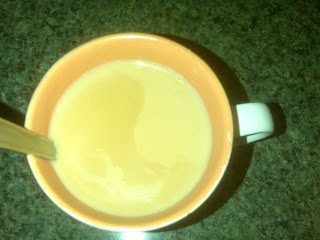 Posted by Neesha Meminger at 12:00 AM No comments:

Fellow Deb, Sarah Ockler, put up this beautiful review of SHINE on the YA blog, The Contemps. It brought tears to my eyes because Sarah contextualized SHINE within the recent controversy surrounding the "Ground Zero Mosque" and Quran burning hoopla. And this resonated, especially, because I've been noticing, clearly stated on some agent sites, that those particular agents prefer not to work with authors who have "political" blogs, or who write "politically polarizing" posts on their blogs.

But here's the thing. For some people, being "political" is not a choice. Stating that racism, sexism, homophobia, classism, etc., exist - to some folks - is simply stating a reality, while others have the luxury (privilege) to choose not to address it, engage with it, or even acknowledge it. I'm not really sure what a polarizing political post is - maybe a call to action? But I do think it's good for agents to state their preferences, just as I think it's good for writers to continue stating their views. Because, really, there are no apolitical views.  The political runs through our day-to-day lives, whether we choose to acknowledge it or not. Choosing not to write political posts IS a political act. Choosing not to see "colour" or race IS a political act. Choosing not to engage in discourse around power and privilege is exercizing that very privilege, and it is most definitely a political act.
Posted by Neesha Meminger at 7:15 PM 6 comments: