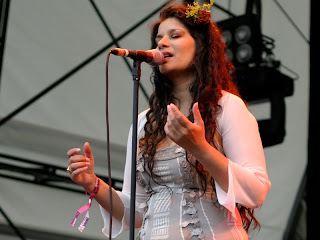 I love Sheila Chandra. Her story is inspiring, her voice is magic, and she has this total earth-mother-goddess vibe. She has no classical training in music and, as a child, she practiced singing so that her voice would be ready when the opportunity came. This is from the bio on her website:


"Born in South London to a South Indian immigrant family, Sheila Chandra discovered her voice at the age of twelve and whilst at Theatre Arts school. From this moment her chosen path was to be a singer. Lacking any real contacts or access to the music business, she nevertheless honed her vocal skills as a labour of love, spending up to two hours a night throwing her voice into the tall, draughty and uncarpeted stairwell of the family home: 'I didn’t know how to manufacture an opportunity, but I was determined that when a chance came my way I would be ready.'"

Don't you just love that? She is an artist's artist - constantly scrapping everything and starting from scratch, transforming herself and her art, and stitching new styles together as she goes along. *Very* inspiring.

I just came across this early video of her beatboxing, in the ancient, Indian style . . .

I can't believe how quickly this summer has blown by. August is around the corner and I feel like I've been doing a zillion-and-one things, but it seems I have nothing to show for it.

I've been keeping an eye on what's going on with Arizona's immigration bill, also known as SB1070; I'm waiting for romance number two to release (next month), and revising romance number three; I've written a few short pieces, both fiction and non-fiction, which should be out and about soon; been keeping up with Hell's Kitchen and SYTYCD (both Fox shows, which I am loathe to acknowledge. Sadly, though not surprisingly, the latter has been on a downward spiral); planning school visits and conferences I'm scheduled for in the fall; and I've been run ragged by the kids.

In between all that, I'm trying to enjoy the summer. The pool is a huge blessing (uh, that we *pay* for) and a refreshing jumpstart on those soupy humid days in the ninety-degree-and-above regions. So I've been trying to get as much solitude by the water as possible before Labour Day sneaks up, and re-reading as much Marion Zimmer Bradley novels as I can.

Also saw an interesting film, featuring time travel, called Happy Accidents. I streamed it through Netflix and was pleasantly surprised. I love Marisa Tomei (since My Cousin Vinny, which I also loved) and the film's premise piqued my interest. It lagged at points, but I was ultimately glad I watched it. I'll probably go back and watch it again, just to see what I might have missed the first time around. If you get a chance to see it, let me know what you think.
Posted by Neesha Meminger at 7:41 PM 4 comments:

My friend, Maria, posted this on her Facebook wall and I just had to share. What would the caption underneath this image be? 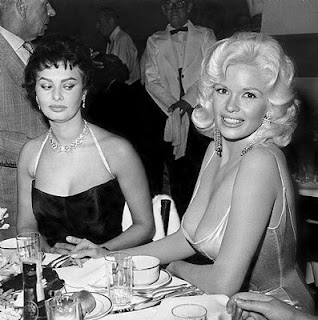 Definitely check out this video of a panel during the Harlem Book Fair, on C-Span. The panel features Jerry Craft, Cheryl Willis Hudson, Venesse Lloyd-Sgambati, Nick Burd and Zetta Elliott . . .
Posted by Neesha Meminger at 11:25 AM No comments:

First, a hearty and happy blog-a-versary to Ari at Reading in Color!! She's giving away a copy of His Own Where by June Jordan, so go over there and do what needs to be done to get it.

Second, my apologies for being a sh*tty blog host. I am not doing much blogging, but I am getting a ton of research done (LOVE RESEARCH), so it kinda evens out in the end. And fear not, I have been busy and you will soon see evidence of this in the form of links and outpourings and whatnot.

In the meantime, think: women warriors. And air conditioning.
Posted by Neesha Meminger at 10:57 PM No comments:

There Goes the Neighborhood

In case you missed it, this article by Joel Stein in Time magazine, called "My Own Private India", has pissed off many Indian-Americans. Here's an excerpt:


"For a while, we assumed all Indians were geniuses. Then, in the 1980s, the doctors and engineers brought over their merchant cousins, and we were no longer so sure about the genius thing. In the 1990s, the not-as-brilliant merchants brought their even-less-bright cousins, and we started to understand why India is so damn poor.

Eventually, there were enough Indians in Edison to change the culture. At which point my townsfolk started calling the new Edisonians "dot heads." One kid I knew in high school drove down an Indian-dense street yelling for its residents to "go home to India." In retrospect, I question just how good our schools were if "dot heads" was the best racist insult we could come up with for a group of people whose gods have multiple arms and an elephant nose."

Lovely, no? In response to some of the outrage, Mr. Stein had this to say on his Facebook page: "Didn't mean to insult Indians with my column this week. Also stupidly assumed their emails would follow that Gandhi non-violence thing."

Can we squeeze any more stereotypes in there? Way to satire, Mr. Stein! Clearly, Indian-Americans were not the target readership for this essay. Perhaps he thought PoC don't read?

Sandip Roy wrote a great response in the Huffington Post. Here's an excerpt from that:


"Dotbusters, for those who missed the 80s, were street gangs who attacked South Asians in places like Jersey City where many immigrants had moved . . . One of those immigrants, Navroze Mody, died after being bashed with bricks. Another, Kaushal Saran, a doctor, was beaten and left unconscious on a busy street corner. Homes were robbed. Women were harassed. [...]

The problem was the smart ones brought in their less smart cousins ("merchants") and the merchants brought in "their even-less-bright cousins, and we started to understand why India is so damn poor." This is immigration reform in a nutshell. Give us your engineers, but not your cabbies and Dunkin Donut-wallas. Except those cabbies and 7/11 owners and motel proprietors work damn hard for their little piece of the American dream.

I think in a way the Indian community is also so obsessed with its presidential scholars and spelling bee champs, with its Indra Nooyis (Pepsico head) and Dr. Sanjay Guptas, it gives short shrift to the little guys, the ones that run gas stations on baking highways in the middle of nowhere, take classes during the day and work graveyard shift at the 7/11. They are the muscle and sinew of our community. But to Joel Stein, they are just so much litter strewn all over his old hometown. That's his problem -- too many Indians."

Satire is only good when it is funny. Stein's essay may be funny to folks in support of bills like Arizona's SB 1070 (also known as the "Support Our Law Enforcement and Safe Neighborhoods Act"), but it's not funny for most Indian-Americans and other immigrants, particularly those who've been on the receiving end of name-calling, harassment, bullying, or violence stemming from views much like the ones expressed in Stein's piece. He may chuckle over his own wit, but there are some who will take essays like this as evidence to bolster an already simmering rage over the "brown hordes flooding" America's borders. Stories are powerful, indeed.
Posted by Neesha Meminger at 10:19 AM 7 comments: