slowly settling back into life. it's a kind of culture shock to come back to "regular" life after spending several days sequestered among like-minded, brilliant souls, discussing and debating issues of race, gender, class, sexuality, politics, current world events and, of course, writing and reading. but it's also necessary rejuvenation. i feel a renewed energy and motivation to imbue what i've learned into daily life and push forward. got a healthy dose of This Is Why Speaking Up Matters.

this year, i wanted to infuse wiscon with poc energy. not by-accident, default kind of poc energy, but consciously created spaces that were meant to celebrate the work and lives of poc. so i took it upon myself to coordinate a reading, and a launch party featuring authors of color who were releasing new work this year.

the reading went beautifully. since ibi zoboi had curated one last year, i asked her to come on board and help curate as well as read. it was a no-brainer to also solicit the brilliant designing skills of her husband, joseph zoboi, who created the gorgeous poster i put up in my last post.

there was such a lovely, supportive energy in the room during the reading, and i had to take a moment to note that here we were, five poc authors telling our own stories, whether we were traditionally published by a large, mainstream press, or a small press, or independently. we were telling our own stories. in a consciously created space, with a receptive and welcoming audience. what a revolutionary concept.

i had been worried we wouldn't have a good turnout because we didn't get to spread the word as much as i would have liked. but i needn't have. the room was full, even at 10 a.m. on a saturday morning.

the dance party was a resounding success, as well. again, i was worried about everything - would we have enough samosas? was there enough wine? non-alcoholic beverages? would people have a good time?

again, i needn't have worried. turns out that sometimes all you have to do is be the one to say, "let's do it," and others are quick to help take turns at the reins. k. tempest bradford took over the dj station and rocked the tunes all night (after some technical difficulties that kept me just shy of hitting PANIC mode), nora jemisin floated around in her corset dress and then took over clean up detail at the end of the night. mary anne mohanraj, kiini ibura salaam, and saladin ahmed picked up the samosas. alaya dawn johnson, nora, and ibi picked up the beverages and paper goods. malinda lo coordinated a raffle to give away copies of our books. *everyone* pitched in. there was a lot of love and support and joy and gratitude for community.

the party went on 'til the wee hours of the morning and even those who had early morning panels (like me) stayed as long as we could. it was beautiful. we need so, so much more of this.

i have a lot of thoughts on the panels i was on, as well as the ones i went to listen to - but i'll do a separate post for that. interesting concepts were brought up and invigorating debates were had. i especially have some thoughts on a couple of the ya panels and the cultural "inappropriation" panel, but more on that in another post.
Posted by Neesha Meminger at 12:20 PM 2 comments: 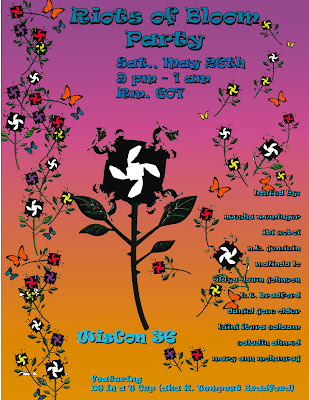 if you're coming to wiscon, join us for a celebration of authors of color and our work! we will have world beats, samosas, beverages and books to give away!!

the flyer was designed by joseph zoboi and features mini-images of the famous rioter throwing a bouquet of flowers - by the british graffiti artist, banksy.

i love this poster so much.


Posted by Neesha Meminger at 9:39 AM No comments:

this thursday, may 10th, i will join fellow authors bil wright, patricia mccormick, and paul griffin for a behind the book reading at the kgb bar in manhattan. come see us and say hello!

then, on tuesday, june 19th, i will read from Into The Wise Dark at nova bar in brooklyn. more on that soon.

in the meantime, it seems we are getting all our rain quota for the year in this merry month of may. i feel like any minute now i will find mold growing on my limbs or between my fingers and toes.
Posted by Neesha Meminger at 10:31 AM No comments: it's may! we are bringing the month in with a dreary, rainy few days here in nyc, but i hear it's about to get a lot better soon. we have a super moon rising on thursday, so there's that right off the bat.

lately, i've been reading books that i want to, quite literally, HUG. i love them so much that i put them against my chest and wrap my arms around them that is how grateful i am that they have decided to enter my life now - at exactly the right moment. when i needed them the most. like, for instance, check this out:


If Holly shops the better boutiques, she's bound to notice that they sell size zero clothing, for the female of really ideal proportions. Yes, Holly will know her diet-and-exercise plan has finally worked when her body ceases to exist.

how can you not love that??? that is from martha beck's Finding Your Own North Star, which i highly recommend. i've had it for like a year, but never opened it up until now. when i first got it, something inside me must've known i needed it, but i was scared to make changes in my life. until it was obvious i needed to make changes in my life and i couldn't avoid it any more. and now that i have begun the process, this book is EXACTLY what i need. who knew? actually, i did. the part of me that's a lot smarter than i give it credit for.

also! i am writing a memoir. why? because i have a lot of shit to say that is relevant to a lot of people. just trust me on that one. more soon!
Posted by Neesha Meminger at 11:07 AM No comments: