Just came back from a "relaxing" stay in the mountains. I put relaxing in quotes because there's something about being in the middle of the woods, surrounded by Republicans with guns, that makes me just a teeny bit uneasy. Made for a sleepless few nights for this gal, I'll tell you that.

I am more than a little glad to be back home in NYC with the rhythms of the Bronx, and the smells of frying fish and tostones around me. Next "relaxing stay" is going to have to be on a mega-star resort, if we can manage it--preferably in the Caribbean.

This New Year's Eve, or Old Year's Night, I will have a lovely dinner with my life partner, then come home well before midnight and bring in the first day of the year with our children, safely and soundly sleeping in their beds.

Whatever you end up doing this evening, I wish much love, light, truth, and peace to you and yours -- happy New Year, all!
Posted by Neesha Meminger at 8:00 AM 4 comments:

Wow: SHINE, COCONUT MOON is on the Smithsonian Notable Books for Children 2009 list! I'm very honoured, and slightly dazed. Most unexpected for this little writer. The only other book I recognized was MARCELO IN THE REAL WORLD, which I am ashamed to say that I have not read yet (but is on my TBR pile).

What wonderful news to wake up to on a stark Saturday morning (with an impending snow storm on the horizon)!!
Posted by Neesha Meminger at 11:13 AM 8 comments:

Links: Authors Gone Wild; We Are Not Rock Stars


"Writers become writers because they are comfortable alone. Out of that silence emerges a kind of music that doesn't need screaming fans."


That's from this interesting NPR article about the lost gilded age of publishing where 7-figure author advances and 22-city book tours have gone the way of the dinosaur.

And this thread on Amazon is getting a lot of attention because the author keeps commenting on a review of one of her books. Some are calling the entire comment thread a "train wreck," and I have to admit I was riveted, but at one point I actually felt bad for the author ("Nightflyr One," a.k.a. Candace Sams). It was truly an everyone-versus-her scenario and you gotta hand it to her...she is NOT backing down. Note that there are *33* pages of comments. What do you think? Should the author just shut up already? Or is she showing courage by fighting against so many voices telling her to shut up and go away?
Posted by Neesha Meminger at 11:37 AM 2 comments:

If you're interested in learning more about the ins-and-outs of publishing, read this illuminating, candid, and no holds barred article by M.J. Rose. Here are a couple of excerpts:


"Self esteem is at the bottom of the way we let ourselves be treated by those who earn their money from us. 'I often wonder if we writers spend so many years learning to live with rejection, that we accept shoddy treatment as our due, just grateful to have any attention...'"


"'Often, [writers are] absolutely right to be feeling that a publisher could be doing a better job of it, paying closer attention, offering more meaningful consultation. That said, I've had many of those same conversations end with the client BEGGING me not to repeat any of it to the editor. God forbid the squeaky wheel might get replaced instead of oiled.'

That fear is part of why we crawl away convincing ourselves we should be grateful instead of acting on our anger. If we get anything -- one ad in a major newspaper, a four city tour, three weeks of decent coop in the chain -- we consider ourselves blessed. We've heard of too many cases where books are dropped or just die from lack of a publisher interest despite a big advance.

So like abused children, we're thankful for every small favor."

In the article, author Amy Bloom is quoted as saying, "One can be appreciative without being subservient. Objectively this is a business, and publishers are not our parents [or] our friends. We sell them our goods and they pay for them. We all need to concentrate on doing business in a positive and supportive way. In a way that does not cause pain."

This "appreciative without being subservient" theme has often been used in reference to PoC addressing systemic racism, as well. Again, we're looking at power dynamics. All abuses of power share a similar pattern and infrastructure, so re-creating a balance has to happen on both ends of the power spectrum.

One of the most interesting parts of the essay for me was toward the end, when the author reveals how hard it was for her to find authors, agents, and editors who were willing to go on record about the issues:


"I have never written an article and had so few authors and publishing people willing to go on the record or be interviewed. Over 50 agents, editors and authors, all refused.

We are in the business of communicating and so this silence is alarming. Widespread hesitancy to speak about [the] issue is almost as interesting as the issue itself."


Yet again, we have similarities to racism, sexism, domestic abuse, etc.--all situations where there is abuse of power. PoC are often afraid to speak out for fear of retribution, as are abused women and children, employees who are sexually harassed, rape victims, and so on.

What I want to know, though, is when did things change? At one point, women weren't really given access to publishing. Women published under male pseudonyms, or used initials to get their work published. Based on everything I've read from writers' accounts and author autobiographies, the relationship between author and publisher seemed far closer and more transparent then, than it is today. Yet, in today's world there are far more women published than ever before--particularly in children's books. And the distance between publisher and author is vast in comparison. So, too, is the distribution of power. Is that a result of the economy? The outdated structures publishing has put in place? Or is it a flaw within the publishing model, itself--a sort of myopia?

In any case, the article is fascinating, and definitely worth the read if you're interested in a behind-the-scenes look at the mysterious world of publishing.

Stay tuned as I explore some of these issues further in upcoming posts.
Posted by Neesha Meminger at 10:55 AM 4 comments:

So, I'm upping my tech know-how by going deeper into Skype. I *lurve* Skype. As with all things computerish and techie, I looked upon it with great disdain initially, until I took the plunge. And now I am a happy convert to the dark side (though to really be on the dark side, I will have to get an iPhone). I do not know why anyone would want to have a plain old phone conversation anymore when you can see the person you're talking to. You see them laugh, wrinkle their nose, roll their eyes. You can see what their new haircut looks like. It's EONS better. Though probably not so good on those zitty, bad hair days.

Anyhoo. I wanted to pop in and put up a quick mention of Marina Budhos' new book! I am always excited when a new South Asian title pops up, especially if it is children's/teen lit. I've been a fan of Marina's work since ASK ME NO QUESTIONS and this new book promises to be just as absorbing. I'm very much looking forward to reading TELL US WE'RE HOME. Here is a bit about it from the jacket copy:


Jaya, Maria, and Lola are just like the other eighth-grade girls in the wealthy suburb of Meadowbrook, New Jersey. They want to go to the spring dance, they love spending time with their best friends after school, sharing frappes and complaining about the other kids. But there's one big difference: all three are daughters of maids and nannies. And they go to school with the very same kids whose families their mothers work for.

That difference grows even bigger--and more painful--when Jaya's mother is accused of theft and Jaya's small, fragile world collapses. When tensions about immigrants start to erupt, fracturing this perfect, serene suburb, all the girls are tested, as outsiders--and as friends. Each of them must learn to find a place for themselves in a town that barely notices they exist.


Marina Budhos gives us a heartbreaking and eye-opening story of friendship, belonging, and finding the way home.


Marina has agreed to an interview here once the book is out (and I've had a chance to read it!), so look out for that. I also heard from hither and thither that Uma Krishnaswami is coming out with a new book. So exciting! There were two of us this year with South Asian YA novels--Sheba Karim and myself--and there will be two next year (though Uma's might be an MG, but still!)! And it's not over yet. We might still be able to squeeze another one or two into 2010 before the year's over ;).
Posted by Neesha Meminger at 10:29 PM No comments:

I have been camera-challenged lately, so I've been relying on the kindness of other camera-wielding folks to get images of events I've been to. So, with the help of Deva Fagan, here is a group shot from last Sunday's book signing at Books of Wonder... 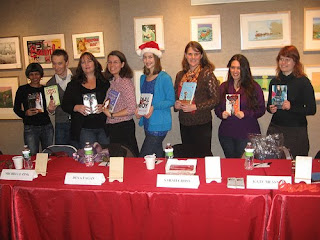 The signing was great, the audience had some probing, interesting questions during the Q&A period, and it was wonderful to hear bits from each book as the authors read from their work.

Next stop is Toronto! January 7th, 7pm at Yorkdale Chapters/Indigo; and January 9th, 2pm at Eaton Center Chapters/Indigo. I'll be signing with Megan Crewe, R.J. Anderson, Rhonda Stapleton, Sarah Ockler, and Lara Zielin. If you're in Toronto or the GTA, I hope to see you!
Posted by Neesha Meminger at 9:59 AM 2 comments:

Popping in quickly with a few updates:

This Sunday, December 6th (besides celebrating The Hubs's birthday), I will be signing books at Books of Wonder in NYC, from 1-3pm. Please stop by if you're in the area!

The weekend after that we are hosting a kickoff holiday party, where I will cook for many, many people and their kids. (!!)

The agent search looks like it is winding down, and I couldn't be happier about that. It is an exhausting (though exciting!) process, and I will be glad to have some time and energy back for doing what I do much better: writing.

After that, I shop for the kiddies, get ready for our family holiday celebrations . . . and then, I collapse.

After which . . . the Toronto readings are set. Two of them, both at Indigo/Chapters stores. Thursday, January 7th, at 7pm, Yorkdale Shopping Center; and Saturday, January 9th, 2pm at the Eaton Center. If you're in Toronto, please come by, get your book signed, and introduce yourself!

After that, we go into the "dead zone" of deep winter where we hibernate as much as possible, sow seeds for the spring, sleep, eat hot, steaming bowls of food and drink hot, steaming mugs of drink.

I will continue to pop in every now and then with updates and interesting links (unless something comes up that I absolutely *must* blog about), but the long posts are on hold until . . . THE DEAD ZONE.
Posted by Neesha Meminger at 11:49 AM 2 comments: