Yesterday, I did a school visit with Kavitha Rajagopalan, author of MUSLIMS OF METROPOLIS (non-fiction). When she and I were chatting about our families' journeys from South Asia to the west, she said, "Wow, how diaspora!" Indeed. In the pic below are Marina Budhos, whose upcoming YA release, TELL US WE'RE HOME, just got a starred review from *Kirkus* (most of us know how elusive that star is), yours truly in the middle, and Kavitha on the right. Unlike the panel discussion with Rita Williams-Garcia, this time I actually remembered my camera!

The discussion on South Asians in the U.S. - in a post-9/11 world - was fascinating, with Ms. Rajagopalan's foreign policy expertise and our alternating fiction/non-fiction narratives. One thing I learned was that the highest number of folks rounded up under suspicion of "terrorism" (those who had Muslim names, or otherwise fit a profile) after the September 11th attacks was in New Jersey. People who'd been in the U.S. for years, working and paying taxes, woke up in the middle of the night to authorities banging on their doors and were dragged away for "questioning" or worse. These were some of the most vulnerable members of the community - low-resourced, undocumented, working class folks who wouldn't have the funds or the necessary time off work to defend themselves in court. The irony, as Ms. Rajagopalan pointed out, is that those individuals who did carry out actual acts of terrorism were often well-resourced, well financed, here on legal visas (*if* they were foreign-born), and fluent in English. 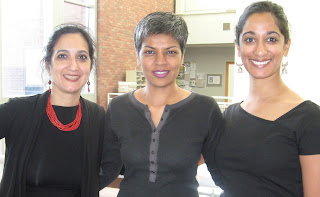 Budhos (left), Meminger (center), Rajagopalan (right)
Marina's book, a YA about three teen friends who are daughters of maids and nannies, comes out next month. It's a twist on the usual teen girl friendship tale - definitely be sure to check it out! And Kavitha's book is available now at the link above. Her non-fiction flows beautifully and is as powerful and evocative as any fiction I've ever read - an important book for anyone who wants insight into an important chapter in recent American history.
Posted by Neesha Meminger at 11:18 AM

You remembered the camera! Nice pic.