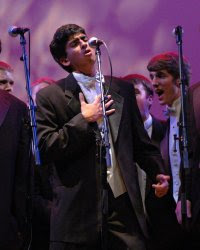 American Idol has a new South Asian contender this year. And this one can actually sing. His name is Anoop Desai. Despite Simon's idiotic comment that Anoop looked too "IT" and like he "just got out of a meeting with Bill Gates" (can we say stereotype, Simon?), Anoop has been crooning with The Clef Hangers at UNC. He's cute, smart, he's fast becoming a sensation, and he's got some real vocals.

It amazes me the hunger out there for Desi images. Desis, in particular are starved to see ourselves on the big screen, doing things that represent our many facets and talents, rather than consistently being pigeon-holed into the "model minority," nerdy, IT sectors.

Bend It Like Bekham was a resounding success; Sanjaya -- as terrible a vocalist as he was -- had legions of fans, young and old alike; Born Confused is still selling phenomenally; and now Noop Dogg. His Facebook page already has over 8000 members and we're only in Hollywood Week.

I, along with all the squealing girls at UNC, will be watching his progress with great interest ;-).

Edited to add: I just saw on Mitali Perkins' Facebook page that Noop has his own webpage! Wow, his people move fast.
Posted by Neesha Meminger at 10:39 AM

Hey, thanks for the link! We encourage ALL Anoop-lovers to come by and wallow in his awesomeness. :)