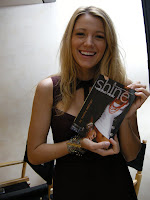 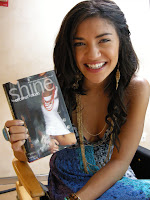 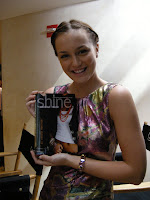 I've received many requests for the backstory to the above pictures, and I'm finally getting my behind in gear and putting it down for you.

As some of you know, my husband works on the show as a camera assistant. Back in March, when my book first came out, he was blabbing about it all over the set. The girls, Blake Lively, Jessica Szohr, and Leighton Meister, had mentioned that they wanted a copy of SHINE, COCONUT MOON shortly after it came out. Several of them wanted to come to my book launch last March at Bluestockings in New York -- Jessica, in particular, was hoping to make it, but had a Dove commercial scheduled the same night.

So, recently, Gossip Girl was shooting at McNally Jackson Books in Manhattan. My husband decided to ask if they happened to have a copy of SHINE, COCONUT MOON. And they did--face out!

The hubs exclaimed, "Hey, look! They have a copy of my wife's book!" People began clapping and there was some excitement from the cast and crew (SO sweet).

Then Blake and Leighton asked for their own copies, as well. The hubs texted me immediately and asked if I would sign copies for them. Duh *grin*.

Of course, I signed the copies, and the next day the hubs got these pictures when they were shooting at Sotheby's on the Upper East Side.

The girls were incredibly warm and said they couldn't wait to read SHINE. Jessica also said she'd get back to me with her thoughts when she was finished reading.

Another of the girls, Yin Chang, who plays the character of Nelly Yuki on the show, also designed a custom onyx and moonstone necklace for me to wear for the SHINE book launch at Bluestockings Bookstore. Yin bought her copy at the launch and read it the week after--she said she missed her stop on the train because she was so absorbed in the story!

So there you have it: the story behind the images. The girls are terrific and I'm delighted for their success on the show.
Posted by Neesha Meminger at 12:24 PM

OMG!! Too cool! You are Rock Star, Neesha!! Congrats on all the success - You deserve it!

That is so cool Neesha!

Congrats. Your husband is the Man.

That's such an awesome story! I love the show and your book :)

Wow, that's awesome, Neesha. Can I say that I am very jealous of your husband's job?