The Fabulous Olugbemisola, Part One 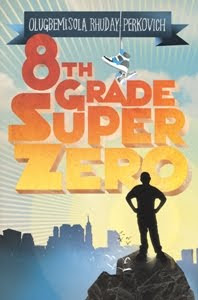 Today, I am thrilled to feature part 1 of an interview I did with the wonderful Olugbemisola Rhuday-Perkovich, author of EIGHTH GRADE SUPERZERO. I read SUPERZERO and just fell in fast, tumbling love with each of the characters. It is a book full of heart and insight, written with warmth and compassion. And Ms. Olugbemisola is a fierce, quietly powerful force to be reckoned with. Here is part one of what she has to say about writing, her process, the '08 election, SUPERZERO, family, and spirituality...
NM: What was the "nugget" that you started with for this novel?
ORP: I started this novel as part of an application for a workshop with Paula Danziger. It was the night before the thing was due, and I needed to come up with three pages, fast. The image of a ten-year-old Reggie in bed, with the covers pulled up over his head, because he was afraid that a bug was going to crawl into his mouth, was the very first image that I had for this story. Whenever I say that, I realize that it sounds nothing like that book it became! But the character was there.

NM: Wow, what a powerful image! And that initial feeling is exactly what I got from the opening chapters. You captured those anxieties so well.

There are parts of the novel where I feel, intuitively, you would have gone a bit more radical. I think I recognized those parts because I have them in my own novel - areas where I would absolutely have gone in with my feminist, anti-racist self and run amuk, but had to rein myself in, either because of feedback from trusted sources, or because I knew I was pushing it. Am I right in this hunch? If so, could you point to parts where this might've happened?
ORP: I think that there were definitely times when I *wanted* to make certain points, and I did hold back because I had to make sure that this book was Reggie's story. I think that especially with a first-person narrative, it can be easy to make the character's voice your own. And I tried that sometimes in the beginning -- Reggie used to also have an older, disaffected brother named Marcus, who spoke in speeches and was usually saying the things that I thought. (Marcus's struggle with racism, my cynicism during the election) I also struggled as an author with thinking too much about how *I* would be perceived by this book. I worried that it wasn't weighty enough, and that it would be dismissed as lightweight, etc. etc. blah blah blah. But then I really had to come to terms with how ridiculous I was being -- either I wanted to tell *Reggie's* story, and be as honest as I could be about it, and connect with those young readers who are/know/could be Reggie and his friends, or I wanted to make it all about me. Instead of writing fully as an adult looking back on childhood days, I had to access who I was at 13 (not who I'd wish I'd been, or thought that I was then), who my friends were, who the 13 year-olds that I know and see are now...Of course, I am writing with the benefit of experience and hindsight and perspective, but I had to make sure that I worked to get out of the way and ask myself at every point if something was *really* part of the story, something that was true to the characters, or was it just something that *I* wanted to say, to wedge in somehow because I thought it would make me look a certain way, or because I was trying to create an opportunity to put me on the page. Humbling work. The most gratifying response recently has been from my sister, who's just reading the book in its entirety now, and said "This doesn't sound like you at all!"
NM: What a fantastic answer. I so relate to the "not weighty enough" worries and wanting to inject my current sensibilities into my character's thoughts and actions. It's such a fine balance!
What made you write this novel in a young male voice? And how was that experience? Would you do it again?
ORP: I really just started with that character, at that moment; I didn't plan it. I would not have expected to write a book with a male MC, and definitely never planned to. Once I started, though, that was it. It didn't seem right to just change him to a girl, which a couple of people suggested. Now that I've thought about it a little, I don't know that I'd do it again. I suppose it depends on the characters that come to me. But I'm definitely a little self-conscious about it now.
NM: Well, Reggie certainly rang true for many folks, including me, so I'm glad he stayed a he :).
I love books that explore spirituality. Tell me a bit about your decision to incorporate themes of spirituality and religion into 8TH GRADE SUPERZERO. Were you worried about it at all?
ORP: I did worry that it would be rejected because of that, and I did submit to my editor, Cheryl Klein, because I thought that, from her blog posts, that she wouldn't dismiss it out of hand for that reason.  And I worried that Christians would think that I should have made Reggie a Christian, or something like that. But it was not a part of the story that I ever considered taking out. It was a part of Reggie's life and person. And it was a part of the lives of so many young people that I'd taught or worked with over the years, in a variety of ways.  They had such great questions, interesting ideas, and always introduced fabulous discussions while we talked about books, daily life, TV, etc. that related to faith and spirituality; it was clear to me that these themes were important parts of their lives in myriad ways. I wanted to 'give back' in a way, to the young people who trusted me enough to share their thoughts on spirituality and faith, because we were able to have those discussions lovingly, and respectfully, even though we each often held different beliefs.
NM: I hear you. I've had so many wonderful conversations with young people about religion and spirituality. They are definitely asking the questions and searching for answers - particularly in a post 9/11 world where religion seems to have taken such a front seat in media and political forums.
Thanks, Olugbemisola!
Readers -- stay tuned for part 2 of this interview! And pick up your copy of EIGHTH GRADE SUPERZERO now. Seriously.
Posted by Neesha Meminger at 4:10 PM

This is great--I completely relate to the part where she talks about getting out of your own way and letting your characters tell their story. Looking forward to part 2!