I've been meaning to post updates on my recent signing/reading events, but there is too much going on and I've allowed myself to become buried. But here are a few quick updates until I find time to do longer and more, um, picturesque (?) posts . . .

The Queens reading was absolutely lovely. Meeting teen readers is always a joy, but I've wanted to read in Queens, especially, since it has one of the largest immigrant populations in NYC. The class of pre-GED students we met with was one hundred percent teens of colour. Seriously. Every last one of them.

And the panel of readers? All white - and me. I couldn't help but wonder how many times a day those students see people who look nothing like them with a platform to freely express their opinions, values, ideas, and creative vision. I know what it was like for me as a teen, and then how powerful it was to finally see women of color speaking their truth boldly and without fear--and provided with a space to do so. Melina Marchetta was reading next to me and spoke beautifully, not just as an ally, but as a woman who could relate to the feeling of being "other" in a place you call home. 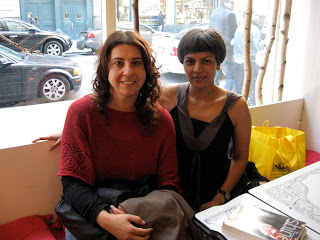 Here we are, above, at the Cupcake Cafe which adjoins Books of Wonder.

Speaking of which, I apologize to anyone who showed up at Books of Wonder and couldn't find copies of Jazz in Love. I'm not sure what the snafu was there, but for some reason my books did not arrive.  I will be there again on May 14th for the Diversity in YA tour, so please stop by then!

In non-writerly news, the whole Chris Brown/Rihanna thing has been really upsetting for me. Even more so than the Charlie Sheen thing. Maybe it's because my girls and so, so many teen girls of colour are hooked in to popular culture and idolize these icons. And my girls, in particular, have many questions I'm always flailing to answer in a way that makes sense to them. Or maybe it's because the dynamics of that relationship are so familiar to me. I don't know.

But things like this help - if you haven't read Daniel Jose Older's piece on Racialicious about men's violence against women, do so now. He also had some great tweets about the topic yesterday - one of which was, "Batterers control anger by not lashing out at judges, cops, their homies, etc. They control it & direct it at their spouses," and the following one, "So u can do all the anger management classes u want but ur just feeding the problem until u instill a foundation of respect towards women."

Chris Brown's recent actions highlight violence against women in our society in stark relief, and are a reminder of the way the Creative Life Force has so brutally been taken hostage in our world. I have to keep telling myself that the fight is raging strong. That more and more people are waking up. Hard to tell sometimes, but I think it's true.
Posted by Neesha Meminger at 11:12 AM

Part of me thinks Chris Brown lost it, so people would be talking about him, with the new album coming out. If not for that it would've been just another morning show interview.

How are Brown's fans going to come to his defense - Buy his new album.

And all of me is pretty much over it.

Part of what depressed me, Doret, was the comments by Brown's apologists. Wow. O_o