I wasn't sure I wanted to go, really, and fought feelings of not wanting to support another Dances With Wolves type of film that exalted the redemption of White Male Saviour. And Avatar certainly had that. I went fully expecting to hate it because of everything I'd read from respected colleagues and friends. And I'm far from being a Cameron fan -- though my guess is that, as usual, he had tons of input from plenty of other creative minds (who will, most likely, never get credit for it).

Could be that my expectations were so low, but I came out of the theater loving the movie. That's right, I said it: "loving." The movie was visually stunning--which I expected. After all, a budget of four hundred million dollars and a shooting location in Hawaii should buy you some pretty shots, shouldn't it?

But I found the film to be slightly more than the racial cow-patty it has been in some discourses. It absolutely has that element--I'm not disputing it. That part DID annoy me. And maybe if I had gone in not knowing I'd encounter that, I'd be more enraged. But as it was, I went in expecting to be offended. But I was far less offended than I thought I'd be.

Don't get me wrong -- I'm not excusing the inherent white male fantasy in the film. There was a most gag-worthy scene where these gorgeous, neon, jelly-fish type of "seeds" from a sacred soul-tree drifted onto the main character, Jake Sully, and settled on his skin, covering his arms, face, and torso and creating a very Jesus-like image. And of course, it was the white male channeled through the Na'vi who rode the biggest dragon in to save the day. So, if you go, DO be prepared for that. And the argument that all the main PoC characters are painted in blue throughout the entire film is totally valid. But, again, I went in knowing all this, so I wasn't surprised and didn't feel the need to retch as soon as I got out of the theater.

So, having said all that... there were some things I was truly impressed with -- not just because my expectations were significantly lowered, but because no one has really touched on these in a lot of the conversations I've been privy to:

1) The women were kickass. Neytiri (played by Zoe Saldana) was FIERCE. If this was a film I could take my girls to (can't, they're too young), I would LOVE for them to see Neytiri. Why can't we have more Neytiris on celluloid? On covers of books? On television? She was strong, full of integrity, beautiful, sensual, confident, protective, nurturing, and did I mention FIERCE? Her number one priority was her people. She didn't just see this exotic white boy and fall madly, deeply in love; completely and utterly giving up her own destiny and her people. Her allegiance was clear from the first moment she met the outsider -- who, for the record, looked *exactly* like her people because he was a hybrid, an inter-species mix of human and Na'vi. Neytiri is totally my shero. She could fight. She knew how to tame and ride a horse AND a dragon. And she didn't need anyone to save her. In fact, she was the saviour, in the end. NOT the white male. 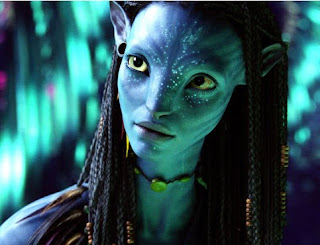 In fact, I'm trying to remember if there was a negative female portrayal at all, and my mind is drawing a blank. The scientist, the pilot, Neytiri, her mother . . . all intense, powerful, principaled women.

2) The spiritual sensibility woven throughout the film. The idea of ancestral connection really resonated with me. This is a concept I grew up with as an Indian woman, a Sikh woman. It's a concept indigenous peoples all over the world are intimately familiar with. And it's a basic Truth of life that the west is only now, perhaps, beginning to embrace. But nonetheless, it's an important concept that should, in my opinion, be incorporated into daily life.

All of the spiritual threads hit home for me. The idea of real, biological connections between the earth, animals, plants, and humans; the concept of Earth as mother (there is an old Bollywood film called Mother India in which Dharti Maa -- Mother Earth -- is repetitively enforced throughout); the idea of energy flow among all living things.

And the fact that all of the spiritual elements were led and upheld by women were another point of resonance. Something I rarely see in mainstream media in any form. In fact, spirituality that is not reduced to a tool of capitalism is something not often portrayed in mainstream media.

3) The exalting of collaborative effort over individual gain. This was a value of the Navi (who seemed to be a mix of indigenous cultures from all over the globe, but a most identifiable similarity was with the Maasai of Eastern Africa--the dress, body type, jewelry, etc.). Connection was a sacred belief. That we are all a connected, bonded network, and what happens to one, affects us all.

5) There was some obvious critique of colonization. Those of us who are aware of the horrors of colonization and imperialism were, in all likelihood, not shocked by the destruction of Pandora at the hands of the colonizers. But for people who never have to face these realities, it very likely was a revelation. And there were clear references to the Bush agenda and approach to foreign relations throughout.

When I left the theater, I caught an older white woman's conversation on her cell phone: "Oh, my gawd, it was horrible. SO depressing, I can't even talk about it." [think Long Island accent]

I wracked my brain to find where the depressing part was, and the only thing I could come up with was the devastation of colonization. Because to me, the end was somewhat inspiring. And the whole film was about resistance--relentless, unceasing resistance which culminates in ultimate victory for those under siege. How unusual to see that in a Hollywood film--particularly when the enemy is a depiction of the American military (for contrast, see this site for a detailed timeline of Paramount's casting decisions for the upcoming film, Airbender. The villains are all PoC, and the heroes are all white).

In the end, this is the way I see it: if we want films (books) to truly and accurately represent us, we need to own our own production houses (publishing houses). There are enough of us out there who are gainfully employed that getting together and starting something could be a reality. But, instead of doing that, we spend all of our energy elbowing our way into the Big House.

This is one film from the Big House that actually got some things right. It got some things wrong, too, but that is to be expected when we are not at the reins, no? It wasn't an independent production. Its aim was to appeal to the masses. And yet, it still portrayed some unpopular ways of looking at life, women, spirituality, American militarism, the Bush agenda, colonization and imperialism. When we're looking to others to represent us, then we have to keep fighting for them to get it right. OR, we can say, "You know what? Fark you. You keep screwing up, so I'm doing my own sh*t."

And since none of us have done that yet (on the scale of Twentienth Century Fox), I'm going to say that I loved this film for what it did get right. Plus, I am a serious sucker for awesome special effects. I was able to get over Keanu's gawd-awful acting and the White Male Saviour concept for the Matrix trilogy for similar reasons.

But the stuff that Avatar did get right is now being viewed by the masses--teenagers who are addicted to female heroines like Bella from Twilight (please don't let my daughters ever try to emulate her), construction workers and wall street types who couldn't give two craps about spirituality, waitresses and lawyers who spend more money on their fingernails and hair than they do on healthy food. All kinds of people are going to see this movie, and it is showing some important perspectives not normally portrayed on the big screen. Or any screen, for that matter. And I, for one, think that is pretty cool.

There is so much more to say on this film and the issues it raises, or doesn't raise, and I'd love to engage in dialogue with others who've seen it. Feel free to comment or email.

Oh--one more thing: if you're going to see it, you MUST see it in 3D. The cinematography is something to be experienced.
Posted by Neesha Meminger at 10:19 AM