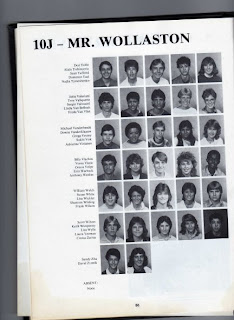 My early high school years were a bit bleak -- mainly as a result of feelings of low self-worth and plummeting self-esteem, in part because I thought I was ugly. That's me in the picture to the left, third row from the top, second photo from the right. In reality, I looked almost exactly as I do now (teensy bit younger), except now I do not think I am ugly. Funny, isn't it? It's all about perspective.

But there were a number of reasons I thought I was unattractive back then: (1) I was not considered pretty at home because I was on the darker end of the spectrum (relatively speaking, of course. My mother is a light-skinned woman); and (2) I was one of a handful of people of color in my school and the beauty ideal for teen girls was (and remains), thin, white, usually blond, usually affluent, and "fashionable" or able to keep up with trends.

In much of the YA literature I've come across that deals with issues of body image and cultural beauty ideals, race is rarely considered as yet another ideal that young girls grapple with. Usually, racism and prejudice are seen as their own, separate struggle. Books by people of color often get slotted into the identity/race category, and the fact that race plays a large role in what it means to be beautiful for young women of color is lost. Those books become about race when really they are primarily about the universal search for self, and a positive, lovable, desirable reflection of that self.

The other day, I found this video on the internet. It's fantastic. It's created by teen girls and addresses the very issue of "race as beauty ideal." The experiment with the dolls toward the end left me reeling. Especially the bit with the question of "which one is bad/nice?"

Lemme know what you think:

Posted by Neesha Meminger at 2:00 PM

Srry about previous comment, it got erased by accident!

I can totally relate and agree with what those young ladies were saying. I personally am south asian like yourself and I'm slightly more towards the darker spectrum as well. I was absolutely shocked at the girl who said the black doll was "bad" but then was forced to choose it as the one that looked most like her. It's sad what society's standards of beauty have become.

i cried when i first saw this video a couple of years ago. powerful, powerful stuff, especially if you can completely relate to it. the creator of the video was up for a scholarship from one of the teen magazines and i believe she won. at the time, i shared it with a bunch of people who said it really opened their eyes (and saddened them) to issues they'd never even thought about.

Wow Neesha, thanks for that post. The doll thing really shocked and saddened me.

What really got me was that the majority of those kids didn't hesitate for a second to pick the black doll when asked which was the "bad" doll. Scary stuff.