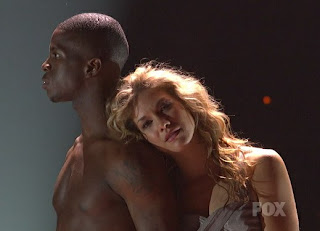 There were only one woman and one person of colour left on SYTYCD tonight (out of four - not bad in itself, but if you watched the whole thing, you know there were all kinds of issues this season). And with Jose gone, and Adechike voted off, I don't know if I'll watch the rest. Okay, I probably will. I do love the all-stars from previous seasons--Twitch, Ade, Comfort, Dominick . . . . Still, Adechike (who hails from Bed-Stuy, Brooklyn, by the way) had a rough road from the beginning with the judges - and he is an awesome dancer. He will, without doubt, go on to have an amazing career, maybe even with the Ailey company, which is what first inspired him to dance. He will be sorely missed, at least by me.

But last night, the performance that got me all choked up was Kent and Neil's piece, choreographed by Travis Wall. What they said on the show was that the story was about two "friends", but hello--am I the only one seeing a lovers' break-up here? Those two seem way closer than a couple of buddies. Either way, it was an incredible routine . . .

I've been sort of conflicted about this season. I do love seeing the all stars though. And the injuries really hurt a lot of dancers that could have been in the finale.

But just like you, I will be watching next week.

Hey, Karen, I'd be interested to know why you were conflicted. For me, it was the blatant, biased judging (especially Mia Michaels'). Adechike, and, later, Jose, didn't warrant much of Michaels' harsh criticisms. They may have been rough around the edges (Jose), or needed improvement in areas (Adechike), but ALL the dancers did. Michaels clearly had her favourites. Plus, I had already lost faith in her judging abilities when she called Brandon, another young black man, "annoying" in a previous season - that was when Mary Murphy stood up and walked out, saying, "I'm not going to sit here and listen to this crap." How is "annoying" a valid critique for any dancer? Grrr.